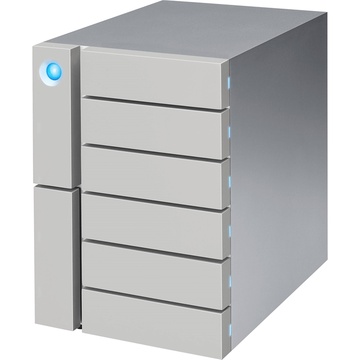 NOTE: This drive comes pre-formatted as RAID 5. This means the capacity of one drive is used to provide protection from a drive failure. Actual usable capacity will show as 40TB.

The 6big 48TB 6-Bay Thunderbolt 3 RAID Array from LaCie offers up to 48TB of storage split over six hot-swappable 8TB 3.5" IronWolf Pro NAS hard drives, each of which utilises one of the array's SATA III 6 Gb/s drive bays. Each drive is equipped with a minimum cache of 128MB and a rotational speed of 7200 rpm, both of which help to ensure uninterrupted data transfers. The array itself is equipped with two 40 Gb/s Thunderbolt 3 ports and one 10 Gb/s USB 3.1 port, each of which use USB Type-C connectivity. For those whose system does not have a USB Type-C port, the 6big is compatible with USB 3.0 and USB 2.0 via an included USB Type-C to Type-A adapter cable.

The 6big supports a variety of hardware-controlled RAID modes, including RAID 0, 1, 5, 6, 10, 50, and 60, each of which offers speed, data redundancy, or a combination of both. Using Thunderbolt 3, RAID 0 supports read and write speeds of up to 1400 MB/s, while a RAID 5 configuration supports read speeds up to 1200 MB/s and write speeds up to 1150 MB/s. When using a USB 3.1 connection, RAID 0 reads and write speeds can go as high as 400 MB/s, while a RAID 5 configuration yields read and write speeds as high as 350 MB/s. Please bear in mind that actual data rates may vary depending on operating environment and other factors. Also, please be aware that RAID 0 does not support hot-swapping.

The 6big 48TB 6-Bay Thunderbolt 3 RAID Array operates using a 100-240V 250W power supply at 50/60 Hz, can be used in 24x7 operating environments, and supports storage expansion via daisy-chaining. The array also supports one 5K display or, via daisy-chaining, dual 4K displays. Its processing and display power will allow users to edit multiple streams of ProRes 422 HQ, ProRes 444 XQ, and uncompressed 10/12-bit HD video. Included with this RAID array is a power cable, a Thunderbolt 3 cable, a USB 3.1 Type-C cable, and a USB 3.1 Type-C to USB 3.0/2.0 Type-A cable. Protection is provided by a limited 5-year warranty.

Fast I/O
For the 6big, LaCie harnessed the performance potential of the Thunderbolt 3 I/O and its fast data transfer rates. They added a hardware RAID controller and 7200 rpm drives, resulting in read speeds of up to 1400 MB/s in RAID 0 and 1200 MB/s in RAID 5.

For Lightning-Fast Video Workflows
Thunderbolt 3 can slash time off nearly every task in a post-production workflow. Ingest hours of raw footage from a Blackmagic Cinema Camera into Adobe Premiere and edit multiple streams of PreRes 422 HQ, ProRes 444 XQ, and uncompressed 10-bit and 12-bit HD video. For big projects packed with high-def clips, thumbnail and preview rendering becomes much more responsive

For Your Smartest Workspace
With double the video bandwidth of its predecessor, Thunderbolt 3 lets you daisy-chain dual 4K displays or a single 5K display to the LaCie 6big. With two 4K displays, you can spread out your workspace by dedicating one display to your timeline and the other to previewing 4K footage. It's even possible to power a compatible laptop through the Thunderbolt 3 connection, which delivers up to 15W to compatible laptops.

Please note that because Thunderbolt 3's 40 Gb/s of bandwidth is shared, daisy-chaining a display will affect the maximum read and write speeds of the 6big.

Consolidate
Instead of buying a new storage device every time you need more capacity, invest up front in a future-proof, RAID-protected solution. Improve data access and security, which can save money in the long term.

Organise
Divide your storage into multiple volumes according to your workflow. Create one safe volume for backing up source media, another for ingesting transcoded clips and current projects, and another for archiving final footage.

Expand
Thunderbolt 3 lets you daisy chain up to six devices to a computer via a single cable. So you could connect up to six LaCie 6big arrays together for storage expansion.

Peace of Mind
IronWolf Pro drives are covered with a 5-year limited warranty that includes Rescue Data Recovery Services. If something goes wrong, your drive will be replaced and your data recovered with one in-lab data recovery service at no additional cost.

No Downtime
If your system fails, simply make a claim and you'll have a replacement unit within a few days, with 25 days to return the failed unit.

LaCie RAID Manager
With Powerful features and a user-friendly setup, LaCie's RAID Manager gives you an intuitive interface to administer the LaCie 6big.

Compact Footprint
Get massive capacity on your desktop in a footprint that's smaller than an iPad Air.

Front-Accessible Drives
Conveniently and quickly remove and replace drives from the front of the product. Keep track of drive health and RAID build status with the front-facing drive status LEDs.

Advanced Cooling
Thermoregulated fans pull heat away from the internal components. Because the fans are redundant, the LaCie 6big remains operational even if a fan fails.

USB 3.1
For universal compatibility, connect to USB Type-C laptops and even USB 3.0 computers via the included USB Type-C to USB Type-A cable.

Kensington Lock Compatible
Tether the product to a fixture to help prevent theft. 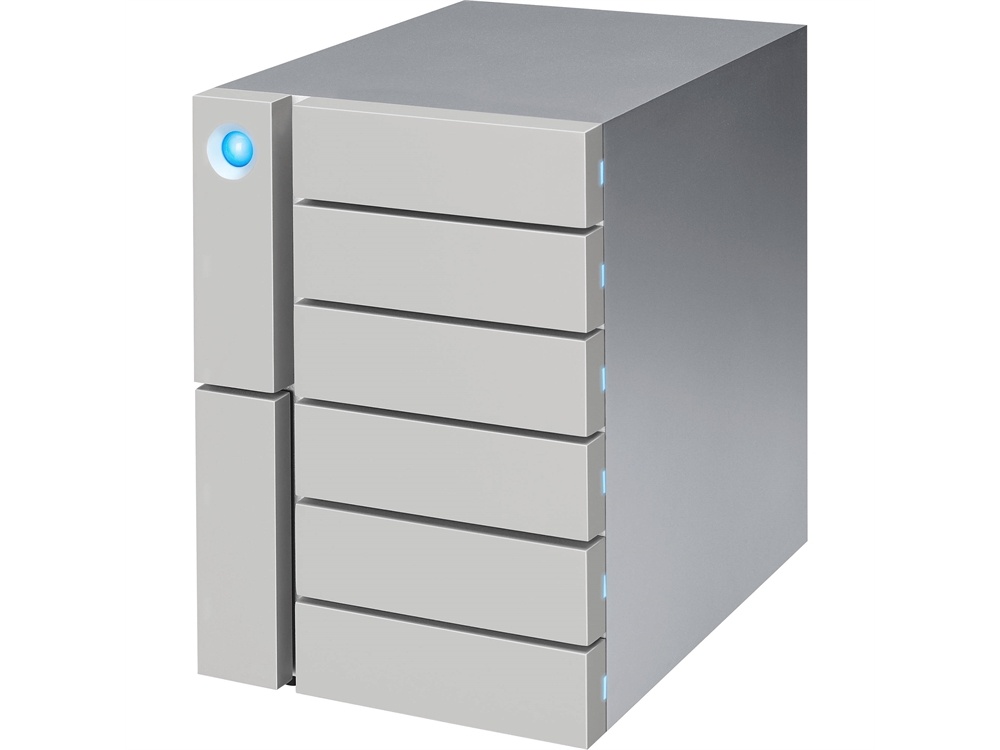