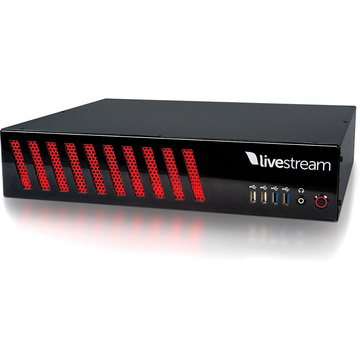 Livestream's Studio HD51 Live Production Switcher is an all-in-one, broadcast-quality, 5-input switcher with pre-installed Livestream Studio production software. Connect up to five HDMI or professional SDI sources and stream to in-venue screens or to the web using the built-in HD multi-bitrate encoder. The HD51 is built to perform with a 3.2 GHz six-core Intel Core i7 processor, 8GB of RAM, and a 1TB 7200rpm hard drive capable of recording four simultaneous isolated (ISO) recordings or 20 hours of broadcast-quality HD video. Using the included rack ears, the HD51 can be rack-mounted in 2U of rack space, making it suitable for studios, production facilities, live venues, and production trucks. Also included is a twelve-month telephone support plan, a configurable, colour-coded Livestream production keyboard, a mouse with mousepad, and power cord.

The HD51 is designed to broadcast television SMPTE and colour sampling standards, supporting formats up to 1080p30/25 and 1080i60/50 and featuring 10-bit 4:2:2 video and 24-bit 48 kHz audio processing. Five Blackmagic Design DeckLink Mini Recorder cards provide support for five inputs sources, with each input available as HDMI or SDI. A Blackmagic Design DeckLink Mini Monitor provides an HDMI and SDI output. Two remote camera sources, such as a live feed from your Livestream account and a remote computer desktop, as also supported, providing a total of seven live inputs. The HD51 supports embedded audio from SDI and HDMI input sources, as well as analogue audio via a 1/8" input. Audio monitoring is available via a 1/8" output.

The pre-installed Livestream Studio live production software provides a full field rate multiview that displays all live inputs, graphics, and media players in real-time. The multiview features audio monitoring for each input and audio PPM overlay with peak hold on all inputs and outputs. The integrated NVIDIA GeForce GT 520 graphics card lets you extend your display to two additional monitors via HDMI and DVI connectors. In terms of graphics, two layers can be overlayed and mixed with transparency. Add text, images, live picture-in-picture, countdown graphics, and more.

Bonded Streaming
By leveraging multiple connections, including Ethernet, WiFi, and 3G/4G LTE, you can spread your stream bandwidth for a more reliable connection. You can also set up alternate backup connections in case your primary connection fails or becomes too slow.

Built-In Multiview
Monitor all your cameras in real-time thanks to the built-in multiviewer. The multiviewer features on-screen full field rate multiview of all live inputs, Preview, Programme Out, two GFX and two DDR, and Audio PPM overlay with peak hold feature on all inputs and outputs. The layout is resizeable to allow for hiding of all controls to maximise multiview screens.

Live Transitions
Cut, dissolve, or select from a collection of SMPTE wipes, with feathering and positioning control. Fade time durations can be manually adjusted in frames via the on-screen T-BAR or keyboard shortcuts.

Audio Input Options
The HD51 supports embedded audio via SDI or HDMI inputs. You can also bring in separate analogue audio using the 1/8" input, or from any USB audio device.

Downstream Key Overlays
Overlays graphics as layers on top of your programme mix with transparency. This is ideal for adding corner bugs, sport cording, lower thirds, picture-in-picture, and other broadcast graphics.

Picture-In-Picture
Composite up to five live audio/video sources together within the graphics editor. Add a simple second camera angle, a scoreboard cam, or even a broadcast network 4-person live chat over an animated background video.

Media Recording (With ISO Recording)
Record your programme output in broadcast quality MJPEG to an AVI file for archive and editing later in your NLE software, or for playback directly within one of the Livestream Studio media players. The HD51 supports up to four simultaneous isolated recordings (ISO). Choose from clean graphics-free video, video with graphics, as well as any live camera input. You can also open the files being recorded in the media players to trim and replay segments from your live show without stopping the recording.

Livestream Studio Media Player
Add recorded material to your programme quickly and easily with the two media players built-in to Livestream Studio. You can import popular media formats such as H.264 video, MP3 and WAV audio), build playlists, loop clips, and auto-play on transition. You can also scrub through footage and trim clips down for broadcast. When working with clips that do not match your project settings, the built-in transcoder is available for file conversion. You can even get basic instant-replay functionality by loading an ISO recording into the media player.

Recording
The HD51 supports four simultaneous recordings. Record up to 20 hours of 1080i video at 100 Mbps in AVI MJPEG with uncompressed audio to the internal 1TB hard drive. Interlacing and "Time of Day" timecode are supported. Recording is fully compatible with Blackmagic Design Media Express and Adobe Premiere.

Remote Camera
Desktop: Broadcast a remote computer desktop video and audio as a Livestream Studio input via your local Wi-Fi or Ethernet network. Full motion and audio are supported.

Cloud: Downlink live feeds from your Livestream accounts and use it as a remote live source in your programme mix.

Tally Light
Use the tally light integration to let your talent and camera operators know which source is live and which source is coming next. The HD51 supports tally devices from MetaSETZ.

Livestream Keyboard and Mouse Included
Use the included Livestream keyboard to quickly access essential functions and features. The keyboard works with all Livestream Studio products. A Livestream mouse and mousepad are also included. 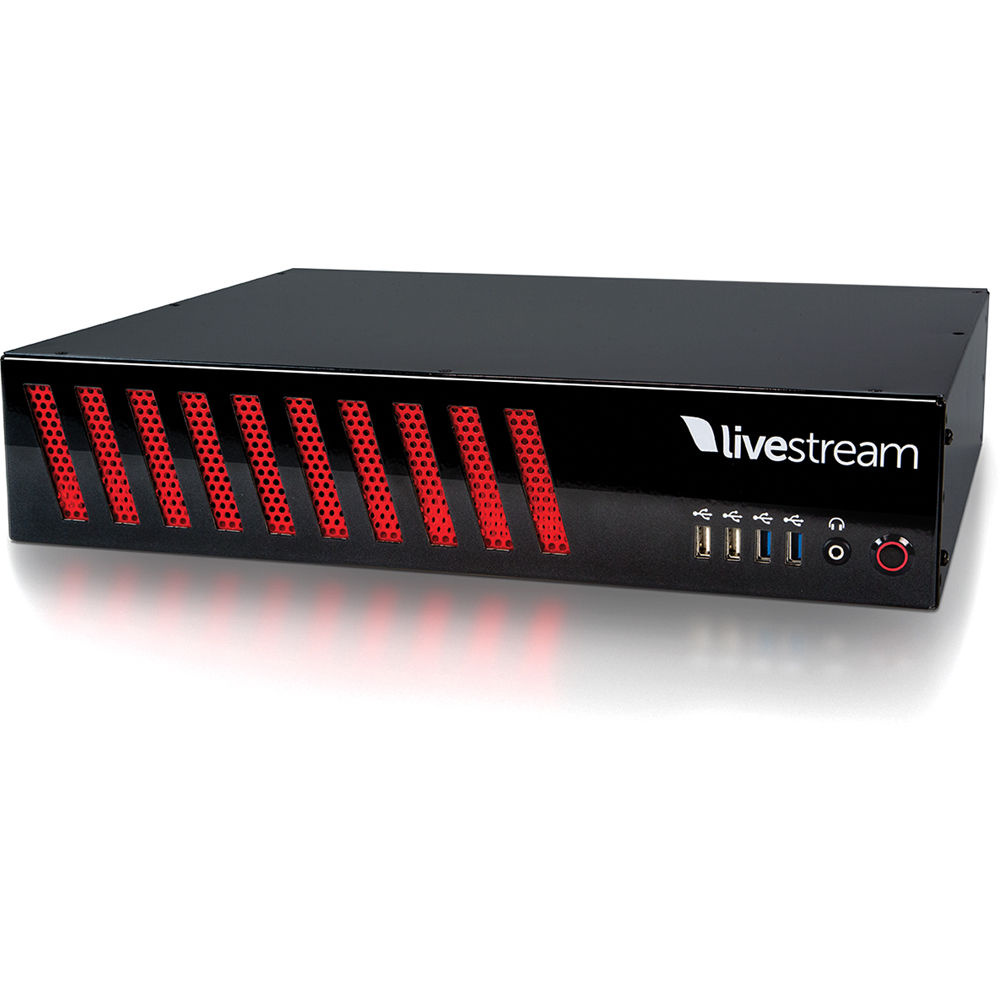