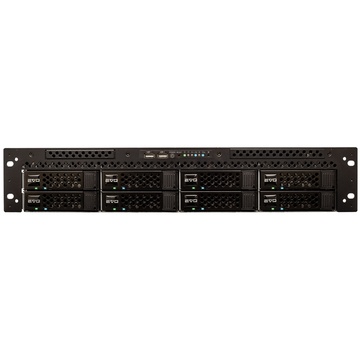 The EVO 32TB (8 x 4TB) 8-Bay Shared Media Storage Server from Studio Network Solutions is a RAID-protected NAS + SAN server that functions as a shared storage solution for multimedia production. This system is developed and tuned for the workflow needs of TV, film, video, graphics, VFX, animation, audio, and broadcast production environments. It provides project, bin, and file sharing, Ethernet ports to directly connect computers in a workgroup, high throughput for video workloads up to 6K resolution, and more.

This EVO is an 8-bay system with a 2U form factor. It has a raw capacity of 32TB, comprised of 8 x 4TB drives and is powered by 64-bit multi-core processors. Network connectivity is achieved using 6 x Gigabit Ethernet ports and RAID 0, 1, 4, 5, 6, and 10 are supported. Included are unlimited SANmp admin/client licences for Windows & Mac, unlimited licences of the ShareBrowser Desktop Client, the globalSAN iSCSI Initiator for Mac OS X, and a fixed 600W power supply. This system also supports one 16-bay expansion chassis for a total of 24 drives of storage between the base unit and the expansion chassis.

Expandability
With the available 8-Bay EVO options, you can:

NAS Recycle Bin
Somebody accidentally trashed something important? No problem. With EVO's recycle bin, you can easily restore deleted files and configure when the trash should be taken out for good

LDAP/AD
EVO can connect to a remote authentication server (Active Directory or LDAP) to get user names and groups. You can then assign permissions to EVO resources based on these accounts for easier management####Workflow####

An EVO unlocks the sharing capabilities of Media Composer - with several editors in the same Avid project, teams can collaborate by using shared bins, exchanging access to media and sequences directly within Media Composer

File and Volume Sharing
Enjoy the flexibility and performance of both file and volume sharing. Some file types and workflows simply work better in a file sharing environment, while others prefer the more dedicated approach of volume sharing.

An EVO allows you to use file sharing, volume sharing, or a combination of the two, providing multi-user write workspaces for sharing projects and bins, in addition to high performance SAN volumes for multi-cam and uncompressed workflows

ShareBrowser Desktop Client
ShareBrowser is a unified file/project/asset management interface for Mac OS X and Windows. It is similar to the Finder/Explorer, but designed by SNS to help media teams work and collaborate more efficiently.

The ShareBrowser Desktop Client not only helps improve visibility and access to your team's storage systems, it also helps enables automatic project locking for FCP, Premiere Pro, and Pro Tools, as well as Avid project and bin sharing. It allows you to search across all the EVO storage as well as local, offline, and other network disks. Assets and custom metadata can be instantly added to the shared database, and users can more easily find, preview, and share media assets and projects. And now, cloud services can appear as workspaces just like your other network storage. ShareBrowser even gives you the capability to securely ingest and migrate data using built-in verification tools

NAS - AFP, SMB, and More
Unify your storage and simplify your workflow with AFP, SMB, NFS, and SFTP file sharing. Simply tell the EVO how you want each volume to be shared: NAS-only, SAN-only, or SAN+NAS

1 Gb/s Ethernet and 10 Gb/s
An EVO can be upgraded to 10GbE, which is a great solution for sites with many Ethernet users. Connect the EVO directly to a switch's 10 Gb/s uplink port, then attach each computer to any of the switch's 1 Gb/s ports

Fibre Channel & iSCSI SAN
Fibre Channel or iSCSI? SAN or NAS? Block level or file level? Why limit yourself to just one? With an EVO, you have it all in one centralised RAID system. This means you get all the benefits of a Storage Area Network and Network Attached Storage integrated into one server

Bridging
You can extend the life of your older Fibre Channel storage array by connecting it to an EVO and bridging it over Ethernet (iSCSI or NAS). It's a great way to setup tiered storage for archiving

I/O Profiles
The EVO is designed and built for digital artists who use applications like Final Cut Pro, Avid Media Composer, Adobe CC/Premiere Pro, and Pro Tools. These apps can have demanding I/O requirements, so each EVO is tuned to help give them what they need, right out of the box. In the unlikely event you need more precise tuning, you can create your own "I/O Profiles" and assign one to any volume on-the-fly

Caching
Advanced caching algorithms help to make the EVO capable of handling more video streams per array. This means you can do more work with a fewer number of disks, which results in a less expensive, more reliable, and energy conscious storage solution

Multipathing
A method of increasing transfer speed is to use more than one data pipe per computer. The EVO offers several ways to take multiple physical connections - Fibre Channel or Ethernet paths - and combine them homogeneously for higher SAN throughput

Preset for Video Apps
The EVO is configured with its defaults preset for use with professional video editing applications. These presets also perform well with other applications, but if you're primarily using applications like Pro Tools or Logic Pro with very high track counts, simply change EVO's I/O profile from Video to Audio for maximum performance

Ethernet Ports
Up to 10 Gigabit Ethernet (GbE) ports are available, giving you an easy and inexpensive way to quickly add more computers to the storage system. You can also choose to add 10GbE ports for maximum bandwidth over iSCSI and NAS

Enterprise Class Drives
Starting with 8 disks in the base unit, expansion units are also available, bringing the total number of disks per managed system to 24. As you add capacity, you can also increase the system's overall capability. An unlimited number of base/expansion nodes can be integrated into a facility

Volume Growth
If your company is growing faster than expected and you're running out of space, increase capacity by phasing in larger disks or adding more drives to your existing storage pools

Users (No per-seat software licencing)
Up to 28 users (workstations, notebooks, and servers) can be direct-attached through an EVO's Ethernet and Fibre Channel ports. If you need to support more users, any available Fibre Channel or Ethernet port can be connected to a switch. And with EVO, there's no per-seat software licencing costs for ShareBrowser, SANmp, and globalSAN

Media Applications
EVO is designed and built for professional media editing and post-production applications like Final Cut Pro, Avid Media Composer, Adobe CC/Premiere Pro, Smoke, Scratch, and Pro Tools. In fact, it can be used with any application, but its prime directive is to handle the high demands of video and audio editing, in real-time, by many concurrent users

SAN Sharing / File Systems
One of the fastest and easiest way to share your SAN volumes is to use the SANmp SAN sharing software included with EVO. But if you're already using something else, such as the Xsan/StorNext file system or metaSAN, you can use that as well

Web-based Admin Tools
EVO's user interface design helps to make it both attractive and intuitive. The result is a functional and helpful administration tool with features ranging from the very basic to the very advanced. Since it's web-based, it can also be administered from just about anywhere

UPS Monitoring
Help protect your storage by connecting it to an APC UPS (Uninterruptible Power Supply). You'll be able to configure and monitor the UPS through EVO's web interface. If there's a power problem detected, EVO can notify you by email and power itself off if necessary

Email/SNMP Remote Monitoring
Select which events are important and monitor them via SNMP, or tell EVO to send an email or text message if it detects something happening

Drive Replacement
Although high quality, enterprise-class, RAID-edition SATA disks are used in the EVO, disks do fail. If this happens, EVO can send an email to let you know. You can then do a hot swap or a cold swap to replace it with a new one. If you're not sure how to do a replacement, step-by-step instructions are displayed in the web interface

Batch RAID Creation
Creating RAID volumes is simple, but it can be a time-consuming step during initial setup of any storage system. Use the Queue Manager to get your RAID sets defined just as you want them - using RAID 0, 1, 4, 5, 6, or 10 - then click a button and move along to something else. Each new volume comes online almost instantly, and you can have EVO send you an email to let you know when it's finished processing your queue

Software Upgrades
Each new version of the EVO OS has brought many improvements and features. With most other storage systems, once you own that box, its capabilities aren't going to change much, except for the occasional firmware upgrade. With EVO, you have an investment in an efficient and flexible storage server that can actually improve its tool set and usefulness over time, rather than having a feature-locked box 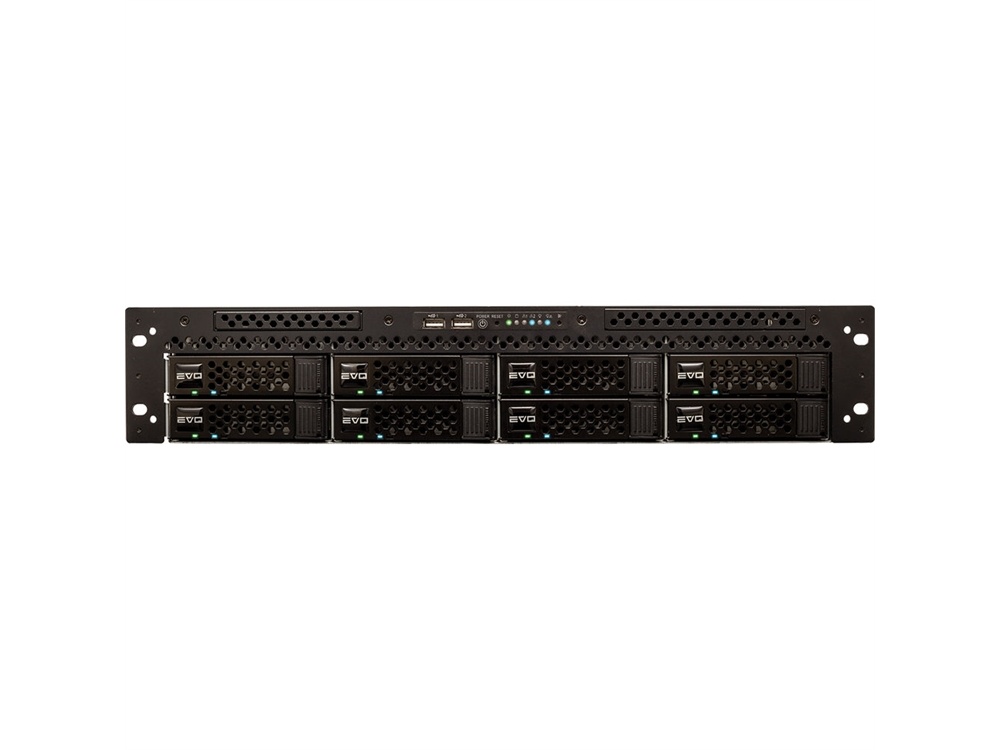