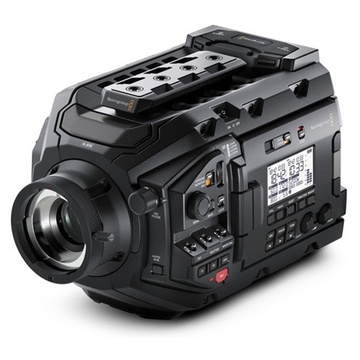 The world’s most affordable and most flexible professional broadcast camera. URSA Broadcast is two cameras in one, an incredible field camera for ENG and programming work, as well as a professional studio camera! URSA Broadcast is perfect for traditional broadcasters because it uses the lenses and batteries you already own, and it also eliminates weird media cards and file formats found on traditional cameras. It records onto regular SD cards and uses the same common file formats found on broadcast media management systems and most NLE software.

Plus URSA Broadcast is perfect for web broadcasters because it works with both older after market HD lenses and inexpensive photo lenses.

Switch instantly between live work or field shooting
URSA Broadcast is two cameras in one! The compact design, familiar controls and broadcast camera features are ideal for ENG style shooting and vital for working quickly when you’re trying to capture breaking news. Whether you’re in the studio or out in the field, URSA Broadcast will give you incredible image quality, accurate skin tones and vibrant colors that are far superior to cameras costing ten times more. The key is URSA Broadcast's new extended video mode that produces pictures you don’t need to color grade so you can shoot, edit and get stories on air faster than ever before URSA Broadcast is also the first camera that finally lets AV and web broadcasters afford a true professional broadcast solution that’s dramatically better than DSLRs.

Standard Media and File Formats
URSA Broadcast is the first professional broadcast camera designed to work with standard media cards and file formats that are compatible with virtually all broadcast systems and editing software. URSA Broadcast records onto inexpensive standard SD cards, UHS-II cards and CFast cards, and records 1080i or 2160p video into standard .mov files, with .mxf to be added in future updates. URSA Broadcast records using DNx145, DNx220X or ProRes so the files will work with your existing broadcast systems and workflows. You also get a B4 lens mount that works with your existing lenses, or you can swap it for optional EF, F and PL lens mounts so you can use standard photographic lenses. If you’re building a complete broadcast camera chain, the optional URSA Viewfinder, URSA Studio Viewfinder and SMPTE fiber converters feature familiar controls and design, so they operate exactly as experienced camera operators expect. URSA Broadcast helps you get the most value out of your investment in cameras, lenses and accessories, which means you’ll save time and money, so the camera virtually pays for itself.

Broadcast B4 Lens Mount
The broadcast B4 lens mount on URSA Broadcast features high performance cinema quality optics with spherical aberration correction specifically designed to match the camera’s sensor. The ⅔” mount lets you use existing HD lenses or Ultra HD lenses. Many high quality HD lenses can be used at resolutions well beyond HD, all the way up to 2.5K or 3K. Because B4 lenses are par-focal and have a very wide depth of field, the image stays in focus as you zoom in and out, so you don't need to chase focus as you shoot. That lets you work much faster because you don’t need to change lenses or refocus between close up, medium and wide shots, which is perfect when you’re following the action in fast paced sport! You also get full electronic B4 lens control so you can adjust the focus, iris and zoom using the camera’s controls, or remotely from an ATEM switcher using the SDI camera control protocol.

Work in HD or Ultra HD
URSA Broadcast features an incredible 4K image sensor and a new extended video mode with better dynamic range and color fidelity. The image sensor is designed for both HD and Ultra HD so you get amazing texture and detail, accurate skin tones, vibrant color and high dynamic range video, all without the need for post production.

That means you can shoot, edit and get stories on air fast! The high resolution sensor is a huge advantage, even when working in HD, because you get sub pixel image processing and superior anti-aliasing for super sharp images. URSA Broadcast is a future proof camera that’s versatile enough to use on any HD or Ultra HD production.

Built in Optical ND Filters
URSA Broadcast features high quality neutral density (ND) filters that let you quickly reduce the amount of light entering the camera. The ¼, 1/16th and 1/64th stop filters have been specifically designed to match the image sensor and color science of URSA Broadcast, providing you with additional latitude and better colorimetry, even under harsh lighting conditions. This lets you use different combinations of aperture and shutter angle, in a wider range of situations. The IR filters have been designed to evenly filter both optical and IR wavelengths. This eliminates the IR contamination usually associated with most ND filters. The ND filters are true optical filters with a precision mechanism that quickly moves them into place when the ND filter dial is turned. The filter settings can be displayed as either a fraction, number, or stop reduction on the LCD.

Non Stop Recording
URSA Broadcast features both dual CFast 2.0 recorders and dual SD/UHS-II card recorders so you can choose the media that works best for you. Both types of media are standard, non-proprietary, inexpensive and readily available at most computer and camera stores. You can record 10-bit broadcast quality DNxHD 145, DNxHD 220X or ProRes files with metadata, making URSA Broadcast compatible with virtually all editing software. That means URSA Broadcast is easy to integrate and fit in to your existing broadcast systems. You can even record lossless 12-bit CinemaDNG RAW files for high quality programming and post production workflows. With dual slots for each media type, URSA Broadcast gives you redundant recorders and non stop recording.

When the first card is full, recording automatically continues onto the next card so you can swap one card while recording continues on the other.

Super Tough and Redundant Design
URSA Broadcast features a super strong, lightweight magnesium alloy body that’s perfectly balanced and designed to be comfortable enough for all day use. Like traditional broadcast cameras, it features familiar externally mounted mechanical switches and controls that give you direct access to the most important camera settings. The controls are laid out logically, making them easy to remember and locate by feel, so you can adjust settings without having to look at the buttons or take the camera off your shoulder. You also get a 4” foldout touchscreen for monitoring, or controlling the camera via a revolutionary software interface that provides full redundancy for all of the external controls and camera functions. There are even redundant controls for the power switch! URSA Broadcast also includes full size standard connections for audio via XLR connectors, SDI via BNC connectors and broadcast power input via a standard 4 pin XLR 12V DC connector.

Familiar Broadcast Control
URSA Broadcast features independent controls for direct access to the most important camera settings. Buttons, switches and dials are laid out in a logical order that makes them easy to find by feel while using the viewfinder. This means you’ll be able to adjust settings, add an ND filter or even change frame rate without having to fold out the touchscreen or take the camera off your shoulder.

Status Display
The status display is a high visibility LCD screen that’s designed to be easily seen, even in bright light! The status display shows record timecode, locked timecode and reference timecode, along with the current shooting frame rate, shutter angle, aperture, white balance, gain and iris. It also features a battery indicator, card recording status and audio meters for monitoring levels. The screen’s backlight can be turned on when you’re shooting in dimly lit locations, and off when you’re shooting outdoors and in bright light to increase contrast, making it easy to read under any condition.

Dramatic Slow Motion
Whether you’re shooting a sporting event or breaking news story, URSA Broadcast can shoot super smooth, crystal clear slow motion video. To shoot slow motion video, URSA Broadcast records at higher frame rates and plays back at standard video frame rates. You can set up your preferred high speed frame rate using the camera’s on screen menus and then switch between standard sync speed and off speed frame rates with the touch of a button on the side of the camera. URSA Broadcast can capture full resolution Ultra HD at up to 60 frames per second.

Broadcast Quality Audio
URSA Broadcast has a high quality microphone and professional audio recorder built in so you don’t have to carry any extra sound equipment! The built in stereo microphone can be used for recording or you can connect professional microphones using the two XLR mic inputs. The XLR connections have 48V of switchable phantom power so you can plug in everything from shotgun to wireless clip on mics. With two microphone inputs, you can record a reporter in the field wearing a lapel or handheld mic, while also capturing ambient sounds from the second input. You can also record the same microphone to both channels using different levels to avoid clipping from unexpected loud noises in the field. URSA Broadcast also features external knobs for adjusting levels and onscreen meters so you can trim audio levels even when shoulder mounted.

Professional Connections
Blackmagic URSA Broadcast features the latest technology and connections such as 12G-SDI. All connections use standard broadcast connectors so you don't need expensive, proprietary cables that are hard to find. This means you can get cables from your favorite supplier or even make your own! You get multi rate12G-SDI connections for video output and return program feed input. Both connections automatically switch speed so they work with all HD and Ultra HD formats up to 2160p60 over a single cable! You also get HD-SDI monitoring out, 2 LANC inputs, balanced XLR audio with phantom power, and timecode/reference input. On the front right side of the camera is a 12 pin Hirose connector for broadcast lens control which can both power and control SD, HD and Ultra HD lenses with both analog and digital control. There’s also a 4 pin XLR 12V DC power output and HD-SDI monitor output that can be used with an URSA Viewfinder, URSA Studio Viewfinder, any viewfinder or external monitor you’d like. 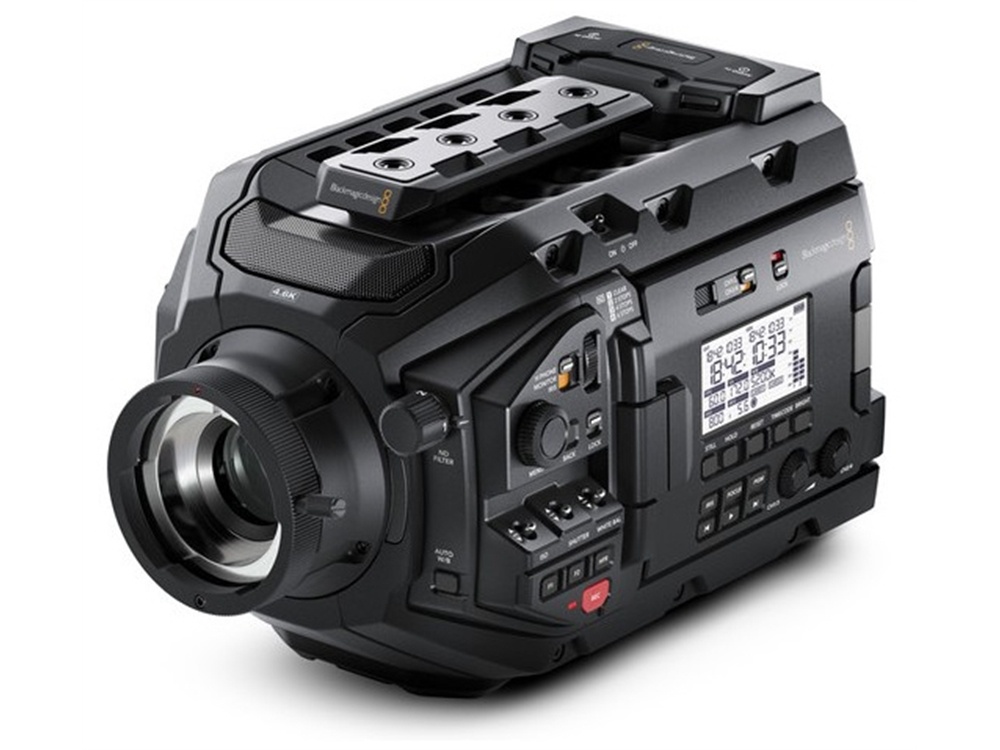