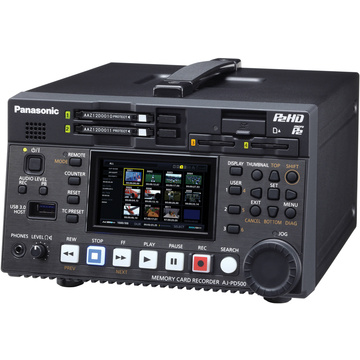 The Panasonic AJ-PD500 AVC-ULTRA P2 Recorder is an HD-SDI and SD-SDI recording system with slots for two P2 and two MicroP2 memory cards. It can record in a number of AVC-ULTRA codecs at up 1080p60 resolution, with 4:2:2 chroma sub-sampling and 10-bit colour. It is a flexible recorder that can be deployed in a number of production contexts These may include house of worship, production, post-production, long-form documentaries, live event systems, satellite facilities, reality television, news trucks, or to serve as a redundant playback and recording device in news facilities.

Among the AVC-ULTRA codecs the AJ-PD500 supports are AVC-Intra100 and Intra50, which are I-frame only codecs that are designed to provide "master quality" recordings with minimal quality loss due to compression and are ideal when extensive colour correction or other post-production manipulations is anticipate down the road. For more efficient compression while still minimising visible quality loss, the recorder offers AVC-LongG50 and AVC-LongG25, which use inter-frame compression similar to AVCHD but offering 4:2:2 and 10-bit colour. In addition, a future upgrade from Panasonic will allow the AJ-PD500 to record in AVC-Intra200 for an ever high level of "master" quality recording as well as AVC-LongG12 and AVC-LongG6 for extended recording times where quality is less of a concern or where the footage will not be exposed to much colour correction or other forms of generational quality loss.

For client applications where a reference copy of the footage is required, the AJ-PD500 can record a proxy file simultaneously with, or instead of, the master copy. The proxy is recorded in H.264 compression using either an .MP4 or .MOV wrapper with bit rates range from up to 3.5 Mb/s down to 800 Kb/s. For compatibility with older P2 and DV equipment, the recorder also supports DVCPRO HD, DVCPRO50, DVCPRO, and DV codecs.

Video can come from a variety of SD and HD sources. The AJ-PD500 features an HD-SDI/SD-SDI digital video input with embedded audio, two AES/EBU digital audio inputs, two XLR analogue audio inputs, timecode in and out, and reference in and through. It features a total of three HD-SDI/SD-SDI outputs with embedded audio; two are intended for the programme feed, and one is for a local preview monitor. It also has an HDMI output so that a consumer grade display such as an HDTV or computer monitor can be used as a cost-effective alternative to a broadcast monitor. There is also a composite monitor out for legacy analogue production monitors. Finally, it features two AES/EBU digital audio outputs and two XRL analogue audio outputs.

The AJ-PD500 features a 3.5" display and front panel buttons allowing you to access the menu settings, manage files, and edit metadata. A jog/shuttle control allows you to scrub through footage on playback and also provides a means of navigate the menu system. For integration with editing systems, it features an RS-422A remote port exposing deck controls to NLE software and also an Ethernet port allowing the recorder to be operated remotely across a network.

A USB 3.0 port allows the AJ-PD500 to act as a host for an external hard drive or SSD drive. This allows you to transfer footage to and from the P2 cards without using a computer as an intermediary so that you can easily distribute copies to the clients or the production team. In addition, the USB 3.0 port can be used to connect a keyboard to make it easier to enter metadata. A USB 2.0 type B "printer port" is also provided so you can connect the recorder directly to a computer. 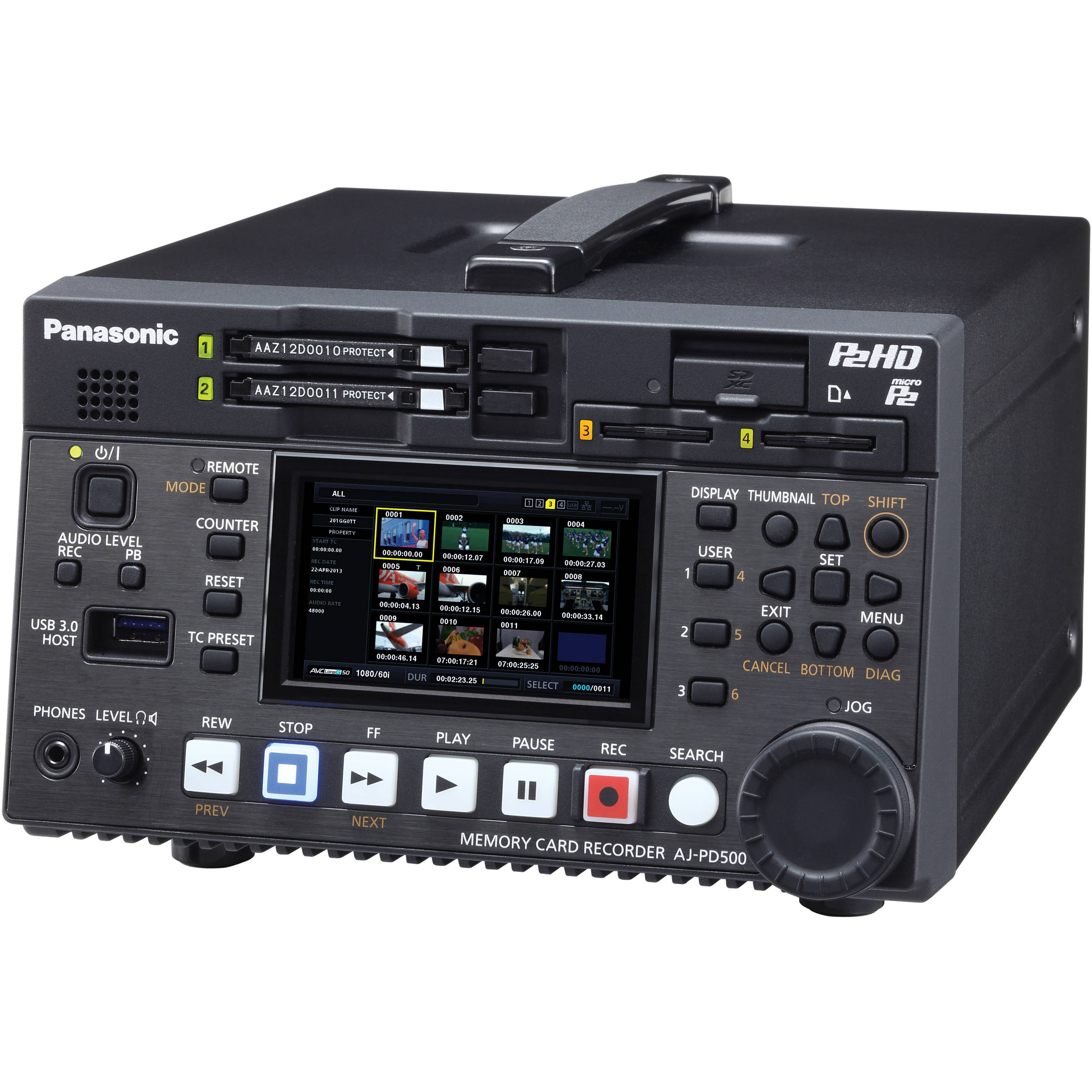